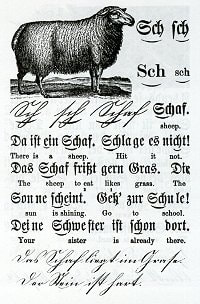 Fraktur and the German script are more or less what developed historically from the appropriation of Latin writing by the barbarians. Charlemagne had a major reform instituted , creating the Karolingische Majuskel and Minuskel (capital and small letters), which enabled various Europeans to read each other's writing again, which had drifted apart in the preceding centuries. Around 1460 the Italian Renaissance created the Roman font to be closer to the ancients; the small letters are more indebted to the karolingische Minuskel.

The gothic Fraktur in its classical form was pushed by emperor Maximilian I (early 16th century). Also Duerer's theoretical writings were printed in a Fraktur developed by H. Andreae, based on models provided by the "Schreibmeister" J. Neudoerffer the older.

There were a number of reforms of Fraktur since the mid-18th century. The late Fraktur is much less elaborate than the earlier. Based on stories heard from relatives, the Nazis originally pushed Fraktur because it was Germanic, but Fraktur was abolished in the Reich in 1941. My source, Brockhaus, says "aus Zweckmaessigkeitsgruenden" (whatever that means). Perhaps they thought it would be easier to run the empire with an easier type of writing.

Suetterlin was a Berlin graphic artist (1865-1917) who worked on simplifications of all kinds of Handschriften. Technically, I think also the Latin script used by German schoolchildren is a "Suetterlinschrift", although most people will only think of the simplified version of the German script that Suetterlin created.

I learned a bit of German script in the 3rd grade or so in the 1950s, but very few people used "deutsche Schrift", and most users that I have run across import parts of the Latin alphabet (Especially less common letters). There are some idiosyncrasies among German writers that can be traced to the old script. The most important is the "eszet", which is a combination of long and round "S"; some Germans still set an "U-Bogen" over "U" if they want to be very clear (but most foreigners think it's an Umlaut and get doubly confused. Occasionally you can also still find the custom of placing a line over "M" to indicate "MM".

Nowadays, I think most Germans will think of the past and may have a vague association with Nazism when "deutsche Schrift" appears. Talking of Nazis -- when the "diaries of Adolf Hitler" were forged, the forgers confused the letters "A" and "F" (using an English-style Fraktur very alien to Nazi monumentalism). They attached the letters "FH" rather than "AH" to the volumes of fake diaries. So much for the familiarity with German scripts even among latter-day right wingers.
​
This information is based on my life experience and some study of "Der grosse Brockhaus".
​
Eckhard Kuhn-Osius
Hunter College, CUNY

Get Involved! Join IGHS and Belong!